A Tale of Two Shows

It was wonderful to see the band in Las Vegas, and that would have been enough (knowing it could be their last tour), but then they announced a handful of east coast dates.  Some of those dates were in Maryland, practically my home turf, so I just couldn’t resist.  Initially, I had only planned on one show, but when I found another band that I wanted to see between that date and their last show in Maryland, I decided to make it a twofer.  They are my favorite band after all, and you only live once!

The venue, owned by the same folks as the one in Vegas, was very similar, though smaller at only about 3000 seats.  What a treat to see a band like this in such an intimate setting!  Much of the stage was the same as well.  The big “A” logo, screens, catwalk, & CO2 canisters all made the trip.  The “toys” from the attic and the extended catwalk into the into the upper seats did not, but they really weren’t missed.  The 30 minute video preview was still used, but fans were not allowed to relocate at will after it finished.  Security was lenient, though, and let people move around as long as they didn’t block aisles or take anyone else’s seat.  All three shows were sold out, despite the rather pricy tickets, showing the draw these guys still have.

Saturday night started with high energy that was maintained throughout the show.  Steven Tyler, at 71, almost never stopped moving as he worked the entire stage and catwalk.  If he could find a way to bottle that energy and sell it, he could probably put the likes of Starbucks out of business.  Steven took a stroll thru the venue at one point, getting close to his fans, and stopping to sing with some along the way.  There were microphones set up along the catwalk that were pointed out so Steven could hear the crowd, and he often pointed his own mic to random fans so he could have that connection.  There was no evidence of the tumble he took on the previous Thursday night, though I don’t know how he wasn’t sore from that.  All of the time tonight that he spent horizontal on the stage was on purpose!

Any friction that may currently exist between Steven and Joe Perry was not at all evident on stage.  The Toxic Twins spent a great deal of time together at the mic and at the end of the catwalk so the fans in the back could see them better.  Their chemistry is undeniable, as is their bond.  Joe had just as much energy as Steven, working the whole stage, playing his well known riffs and solos.  Brad Whitford and Tom Hamilton are much less flashy as far as their stage presence, though both are extremely talented & underrated musicians.  Steven made sure they both spent some time at the end of the catwalk and in the spotlight so the fans could see that.  Joey Kraemer was not present behind the drum kit, due to a sprained ankle, though he did come out and greet the crowd at the end of the show.  His tech, John Douglas filled in without missing a beat.

People at shows can be almost as fun as the band.  The two couples behind me came up from FL, and the one fella had obviously been enjoying the adult beverages a bit more than most and was dancing like no one was watching.  He was having fun.  Hopefully, he remembered it later.  The couple next to me about made a career of running around the venue looking for a better vantage point every time the Toxic Twins went to the end of the catwalk.  I can’t imagine they actually saw much since they spent so much time running around, but as long as they had fun doing it.  One girl had the privilege of sitting on the stage during a song and was nearly apoplectic.  I guess I was that way once, too, but it is fun to see younger generations so worked up over these guys.

Two hours later, giant balloons had been dropped and bounced all over the venue, confetti had been scattered and the house lights came back on.  Another show in the books.  While I never thought it could be possible, this show was even better than the one I saw in Las Vegas.

Tuesday’s show was much the same - similar crowd, same set list, John Douglas still filling in on drums, and my seat was even in a similar location - but things seemed just a bit off.  The show wasn’t bad, just not as good as Saturday.  After a slight delay of maybe 10-15 minutes, the video started rolling and the band came out afterward, as expected.  The lighting seemed a tad different and I don’t know if it was planned, a timing issue or the lighting guy was just having a bad day.  The sound guy was definitely having a bad day, and you could tell it was grating on Steven’s nerves, though he tried his best to hide it.  At various times, instruments and mics for different band members were either too loud or too quiet, and Steven could be seen on a couple of occasions indicating that he couldn’t hear the audience mics.  Joe seemed a bit out of sorts as well, maybe for his own reasons or because Steven was unhappy.  During “Dream On” the band’s instruments became so loud that they almost completely drowned out Steven’s singing and piano, and his displeasure became obvious.  The show went on, however, though I’m guessing there was a tongue lashing afterwards.  I wonder how many really even noticed any of it.

Steven’s walk thru the venue also seemed to take an unpleasant turn.  Maybe his aggravation that night made him a little more sensitive to the handsy fans, or maybe the fans were being more grabby than normal, but he seemed to get angry at someone that got a little too personal.  Once back on stage, things returned to normal.

Several bras made their way onto the stage, something I don’t recall seeing on Saturday, and Steven got a kick out of one in particular for it’s size.  At one point, late in the show, Steven decided some fans needed cooling off (or he just wanted to see someone in a wet t-shirt), so he took a large bottle of water and proceeded to squirt it all over.  That happened to be my section, and the girl next to me and the one in front of her ended up soaked.  I got a little wet, but the camera came thru unscathed and with a few pictures of the event.  The girl next to me must have taken some issue with it based on what she was telling everyone, and it made me shake my head at the drama some folks need to create.  I was just there to enjoy a show, not get caught up in someone else’s crap.  If you’re that stressed out at a concert, you're doing it wrong.  Be like the dude from FL - have an adult beverage or four, dance like no one’s watching and just have fun!

Aerosmith has a stop in MA before they head back to Las Vegas for the remainder of the year.  This is a show to see if you can.  A little birdy said that the guys just may extend the residency again, or add some dates elsewhere because they don’t seem ready to call it quits.

Livin' On the Edge

Some Old Song and Dance

Love in an Elevator

Toys In The Attic

All Photos from the crowd. 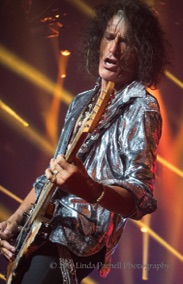 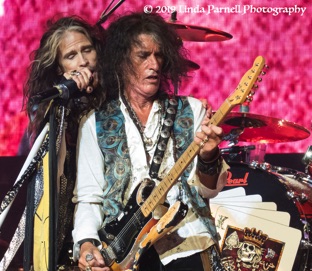