There probably isn’t much that can be said about this band that hasn’t already been said.  With this residency come thoughts that their touring career is winding down, and after nearly 50 years, you really can’t blame them if they want to slow down.  They sure didn’t act like a band ready to hang it up, though.  But I get ahead of myself.

Aerosmith has always been one of my favorite bands.  I can remember hanging out with a friend as a kid, listening to her sister’s Aerosmith records and dreaming of seeing them live.  Unfortunately, I didn’t get to do that during their early years, but I did my best to make up for it later on.  This trip was planned the minute the fan club announced the pre-sale, just in case there wasn’t another chance.  At only 5200 seats, the venue is smaller than Aerosmith generally plays in, so this was going to be a special kind of show and I was going to catch one no matter what.

Prior to the show, there were different levels of VIP packages, some that included a meet and greet with certain band members.  All packages included a tour thru a mini-museum that had been set up just for this residency (and available only to VIP ticket holders).  The museum contained items pulled from the band’s warehouse and was like an Aerosmith time capsule with everything from awards to clothing to artwork, and various musical instruments, of course.  They even had the band’s old tour van that had recently found in the woods, but it was set up in the lobby for everyone to enjoy.

I’m always hesitant to do meet and greets because I know that too often they just aren’t worth the cost.  My friend Karen, who was supposed to be on this trip, talked me into it, however.  She had never seen the band, and after a Steven Tyler solo show and subsequent, impromptu M&G by his limo, she decide we would be doing both the first chance we got.  Karen didn’t make this trip, not physically anyway, as she passed away unexpectedly last fall.  I know she was there in spirit though (has probably been at all of their Vegas shows), and no doubt got a kick watching my M&G with Steven & Joe.  Joe was gracious and soft-spoken.  Steven was silly, but made that moment something special, and I certainly won’t forget it.  Both made it obvious that they truly care about their fans, and the whole experience was more than worth it.

At show-time, the big screens started displaying a video - an Aerosmith retrospective, telling their story, how they met and became one of the most famous rock bands of all time.  Excitement built up as the video played and when the timer on the video hit zero and the band came on stage, the place was ready to erupt!  They may not have been able to keep everyone in their seats, even if they had tried!  Maybe it was the intent from the beginning to allow the crowd to rush the stage, or maybe something that evolved after a few shows.  Either way, it provided the perfect rock concert effect - maximum excitement, mild chaos, writhing humanity vying for prime real estate close to the stage where they might see their idol better, or even make contact.  I was in a tough location - a few rows back and in the middle of the row - but managed a pretty good spot near the catwalk, where the height dipped to a more manageable level.  As I get older, I tend to appreciate having a seat at concerts.  But this night, I just wanted to be right there at the stage.  I didn’t care if it was uncomfortable, if I was getting crushed or if I couldn’t see.  I just had to be right there, where my favorite musicians were playing right above me, maybe looking down, sweat dripping.  Maybe Steven would hold the mic out to me or Joe would hand me a guitar pic.  This is what it's all about!

It was evident from the moment they hit the stage that this band hasn’t lost a beat.  Joe’s playing was impeccable as he worked the stage and catwalk.  Brad & Tom were a solid presence, though less flashy, keeping more to the background.  Steven’s vocals were spot-on and he displayed what makes him one of the best front-men in rock.  Not only did he spend much of his time on the catwalk, closest to his fans, but he made his way into the crowd at one point, to get even closer and sing with a few lucky fans.  The bond between Steven and Joe, both as musicians and friends, was evident every time the two came together on stage.  That kind of chemistry can’t be faked.

The setlist consisted mostly of older songs.  Besides “Sweet Emotion”, “Hangman Jury” has always been one of my personal favorites, so I was delighted to see that one in the setlist.  During “Toys In The Attic”, the giant replicas of the toys from the album cover that were hanging in the theater’s rafters were brought to life.  At the end of the encore, huge red and yellow balloons, with the Aerosmith logo, were dropped on the crowd, along with massive amounts of confetti.  The only disappointment was the absence of Joey Kraemer.  His drum tech was filling in quite admirably, but Joey was missed.  No real explanation was given other than they hoped to see him at the Friday show.  In a later statement, they said he had a minor accident, injuring his shoulder, and would have to miss the 26th as well.

For any true Aerosmith fan, this is a, must-see show.  If you just like a good rock-show, you will definitely enjoy this as well.  The whole energy of the thing if off the charts.  They will continue residency dates at additional times throughout the year, with a few east coast dates added on (also in small venues).  I’ll be seeing them again in August (and maybe another show if I can possibly fit it in). 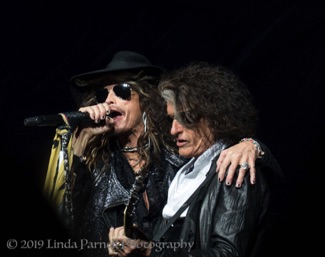 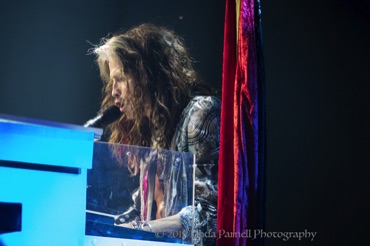 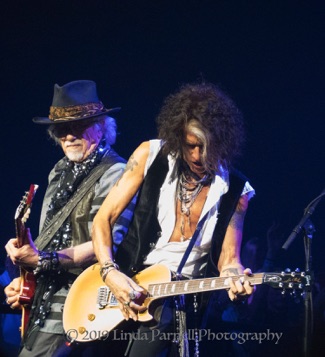 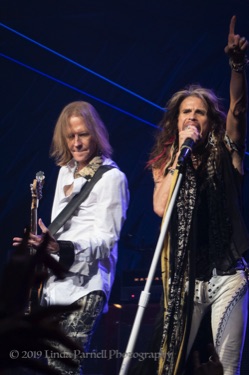 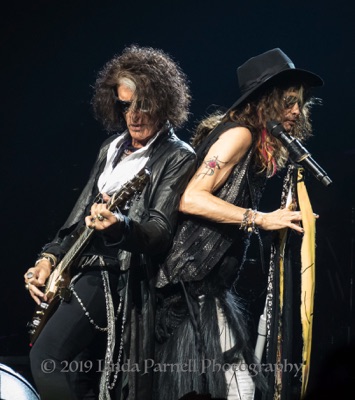